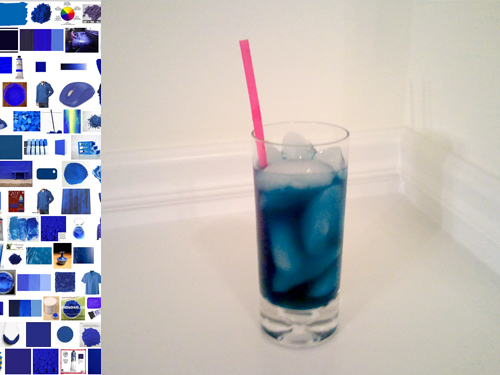 With a blue drink needed for my Cocktails in the Park with George, I of course immediately turned to the old staple of Blue Curacao, which I had in the back of the liquor cabinet from some early tiki drinks but hadn’t touched in years. I was looking to create ultramarine blue (hex value of #3F00FF) which is a completely saturated blue with a little red thrown in (I think I got a little too much green in mine somehow, but alas).

Shake with ice and strain into collins glass over ice.

I hadn’t yet in this series used cachaça, which comes from sugarcane juice and is popular in South America, so I gravitated immediately to that as rum seemed a little obvious with the spirit. Cachaça is similar to rum, coming from the sugarcane, but rum a lot of time is made from molasses whereas cachaça is distilled from the sugarcane juice. To me they taste nothing alike.

For some bitterness, I went with Byrrh, which I had recently acquired and had a nice reddish tone. The mix at this point really needed some tartness, so I grabbed a lime. The result was not unlike the famous (and tasty) Caipirinha, made simply with cachaça and muddled lime and sugar.