The North By Northwest Cocktail 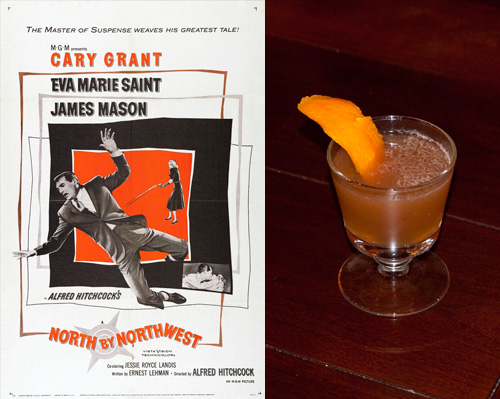 North by Northwest was a hard one for me that produced a lot of failed attempts, but one that finally stuck was a riff on the Blood and Sand. I substituted Bourbon (what they drug Roger with) for the Scotch (what he drinks by choice) into a cocktail of mistaken identity.

The North By Northwest Cocktail

Shake with ice. Strain into old fashioned glass over rocks. Garnish with an orange twist.

I played with the proportions a bit and substituted Averell, a liqueur of Damson plums, for the Cherry Heering, which always tastes like cough syrup to me. I pulled the bitters out as well as I felt they weren’t needed in the final concoction. Yummy, and nary a cropduster in sight. 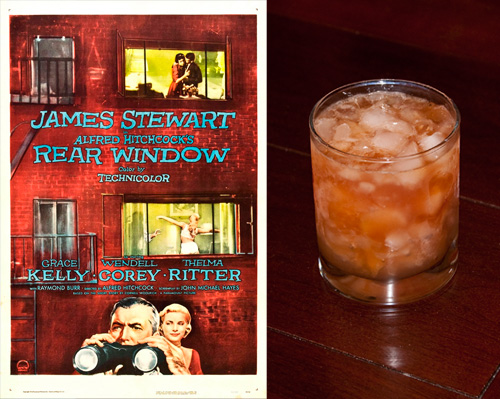 I had absolutely no idea at first with Rear Window. Then I considered how through his window into the courtyard Jeff observes all these disparate people and I thought that perhaps the cocktail could be just that — a mix where each ingredient represented each of his neighbors, brought together into a single perspective. And I knew it had to be nice and cool to account for that hot summer in the film. Thus:

Shake with ice. Strain over cracked ice in an old fashioned glass.

So, grapefruit juice for Miss Torso, passionfruit syrup for Miss Lonelyheart, some sophisticated Cognac for the songwriter and his parties, and a dark, dark rum for Mr. Thorwald. Mix in some bitters from Jeff himself and the result was a surprising, refreshing sipper fit for any voyeur on a hot day. 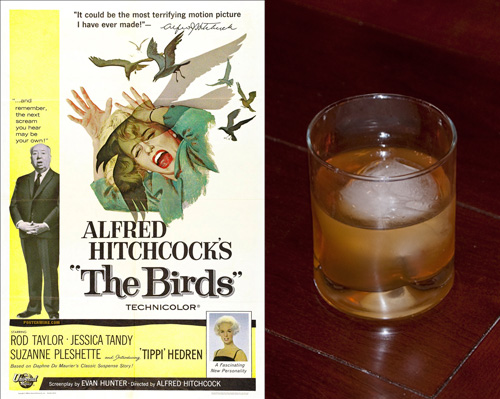 Stir with ice. Strain into old fashioned glass over ice. Twist a lemon peel then discard.

I scoured my bar for any bottles featuring a bird, as seemed appropriate for this cocktail. Famous Grouse didn’t work well in it, and I knew there wasn’t a Grey Goose that could stand up to Fernet, so this is the combination I happily ended up with. Yes, all three bottles feature birds. They’re coming for you. 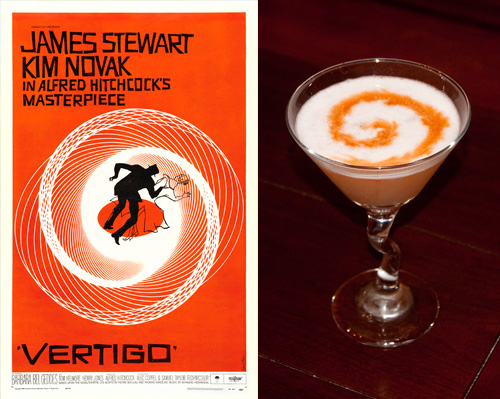 Shake without ice, then shake longer with ice. Strain into a chilled cocktail glass and garnish with a barspoon of Angostura bitters, swirled into a pattern using a toothpick.

The first thing I thought of when considering a drink for Vertigo was the famous Saul Bass poster with the spirals and I knew I wanted to create a drink that would allow me to do that. An egg white would help with that, and considering that many friends have appeared queasy and afraid when I mentioned an egg white drink, I thought it would be doubly appropriate. Beyond that, I went with tequila for Carlotta Valdez in the movie (who was probably Spanish, not Mexican — I couldn’t remember, but ah well) and lots of floral flavors for the flowers that played a prominent role in the film. 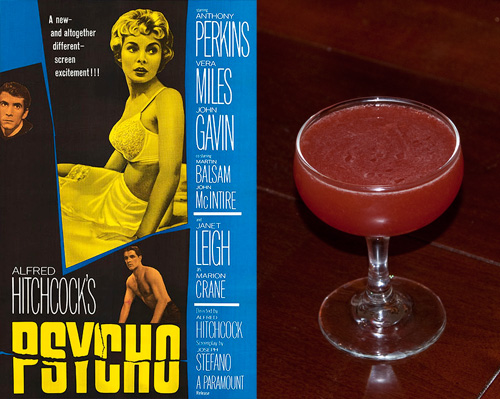 The first thought behind this was to create something blood red without resorting to a Bloody Mary’s tomato juice, hence the hefty portion of Peychaud’s, which I also found helped balance the sweetness from the Chartreuse and Cynar (itself also a bitter component). The drink is a crossdressing variation on the Last Word, with Rye wearing the Gin’s clothing, and lemon for lime, reduced. The sriracha can be included or not, but I like the little extra bite I thought the Psycho deserved. 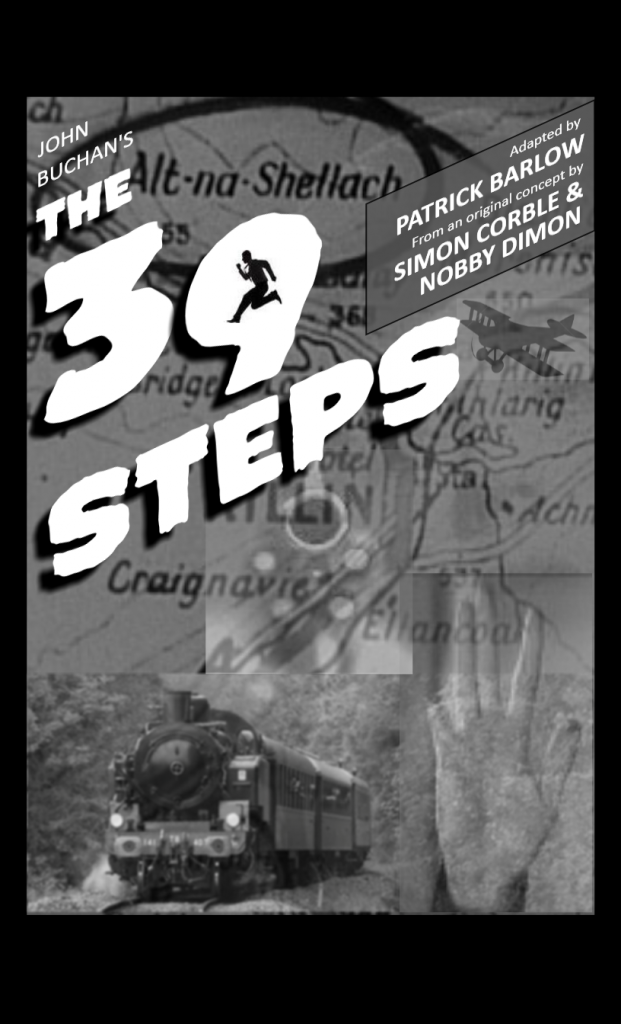 Took a little holiday break, but now am getting back into the swing of things a month into the new year. I have a couple shows coming up in the next several months, but in the meantime I thought I would pop back in time a couple of years when I directed a production of The 39 Steps, a wonderful piece based on the early Hitchcock film (based on the book of the same name by John Buchan). It consists of four performers recreating the entirety of the film on stage on a shoe string budget. And it’s absolutely hilarious because of it.

As it turned out, although I was just on this as director, my lead lost his voice and had to bow out three days before we opened. Show must go on and all that, so I stepped in. What a whirlwind that week was! At least I had already prepared my cocktails for the show, which I based upon famous films in Hitchcock’s oeuvre (what a wonderfully pretentious word that I never get to use, since I always forget how it’s pronounced).

So let me introduce in the following posts the collection I dubbed my “Hitchcocktails.”