Before the next batch of cocktails for shows, I thought I would present a couple of the posters for shows I created earlier this year. First was for the classic Cole Porter musical Kiss Me, Kate. 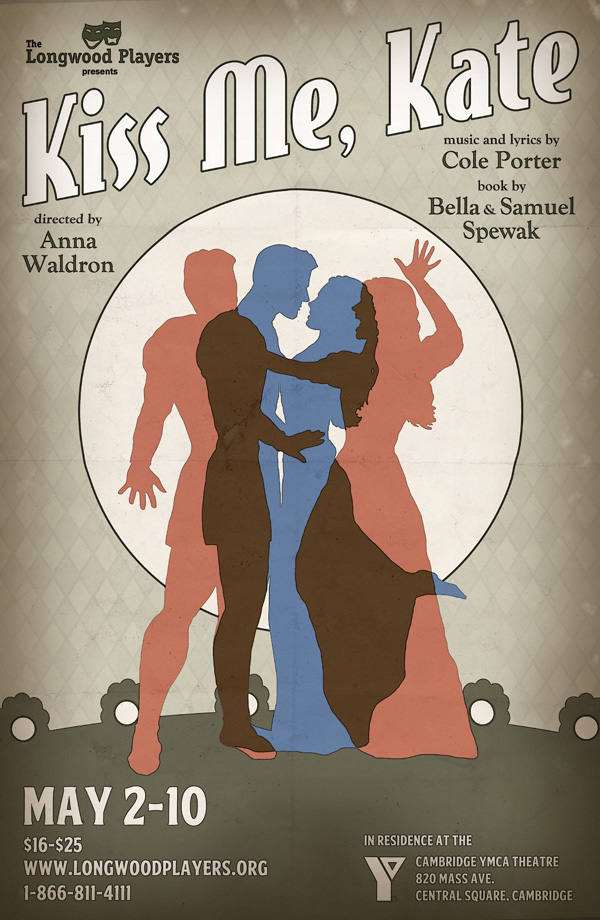 In Kiss Me, Kate, there is a show within a show, as performers present a musical adaption of Shakespeare’s The Taming of the Shrew, so I wanted to be able to represent that love-hate duality present in both Shrew as well as Kiss Me, Kate. The costumes themselves are obviously there to help evoke an Elizabethan drama, the footlights and spotlight to show a theatrical setting.

Once again I went with silhouettes, which I recognize as a bit of a crutch, but when these posters are completed often before casting (or any photography of cast) and people should be represented, I find it is the best way to accomplish that. Plus, in this instance, the overlaying images are much easier to read, I feel, as solid shapes without details.

The fonts and colors were chosen for a 1940’s theatrical poster feel. The harlequin diamond texture in the background was included as a nod to the original Kiss Me, Kate art, and provides a bit of visual interest through texture, while also evoking old theater.

Finally, to make it seem like vintage poster art from that particular era of the show (the 40’s) I aged the final piece with some texture and filters.

It’s been a while since I participated in Mixology Monday, but with my next block of cocktails re-presenting drinks I made for The Wild Party nearly two years ago, one of which was a non-alcoholic offering for one of my castmates, my drinks to catalog coincided perfectly with the theme for this month, Temperance. As presented by Scott at Shake, Strain & Sip:

While many of us today think of overly sweet and unimaginative uses of fruit juice combinations when we hear of nonalcoholic beverages, there is a growing resurgence and movement of creating real craft “mocktails” in cocktail bars around the world… As such, this month’s theme challenges you to create unique craft “mocktails” only limited by your imagination. Perhaps you have an abundance of that homemade lavender syrup sitting in your fridge? Maybe you’ve been thinking about creating a non-alcoholic version of your favorite cocktail. Or maybe you just wanted an excuse to mix up an Angostura Phosphate you saw in Imbibe. Oh yes, non-potable bitters are fair game here since they are legally classified as nonalcoholic in the states. However, if the Teetotalist inside of you won’t allow it, you can go without them. Cheers!

When I worked on The Wild Party menu (drinks to follow), a non-drinking castmate asked if I might prepare something for special for her. I did, and I named it for for her.

Shake with ice, then strain into old fashioned over ice, topping with 2-4 oz. club soda.

So I generally get fairly positive reactions when I mix my drinks for my friends. Occasionally they might be too strong, and at times they aren’t to the taste of everyone, but for the most part I’ll get a thumbs up (and they’re not always sparing my feelings!). With this drink, though, I received more praise than I had for any other drink I mixed at that party, and I had requests for it all night by drinkers and non-drinkers alike. I like it particularly for the saltiness that comes from the Ponzu in combination with the tart of the lime. The bitters along with the sweet orgeat introduce some exotic undertones that help to relieve the drink of its simple fruit juice mix origins.

Top with as much club soda as you need to lighten up the resulting mixture, which is yummy, but thick — not in a viscous way, but rather in concentrated flavor. It also helps to extend the life of the drink, which, for me, disappears pretty quickly. Case in point: after the picture you see above was taken, the drink was downed before I even made it back to the kitchen. Ah well. I’ll just have to mix another.