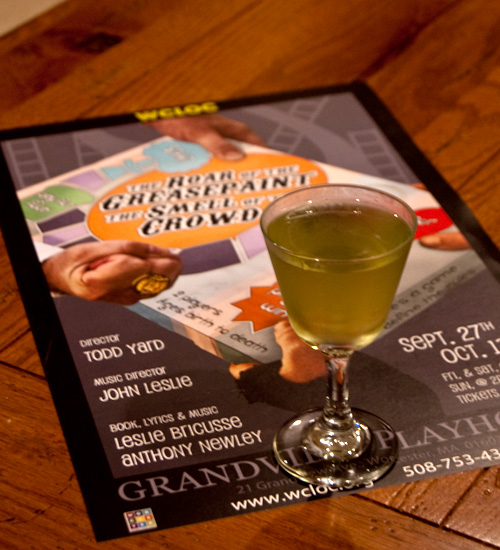 For my single Roar of the Greasepaint cocktail, I wanted something elevated and something common. I thought I might go with some wine in the mix — there is certainly enough consumed by the characters in the show — but also thought gin made sense for the more common element and couldn’t see the wine working out. In the end, I decided on a half and half recipe representing the two main characters of Sir and Cocky.

Then, of course, came finding the name. There are a number of delightful phrases in the book that could probably fill a bar menu: All Due Respect, Towering Eyeful, Ars Ex Libris, Purple Fit, St. Clarence the Stutterer (or St. Vitus the Uninhibited), Your Move, I could go on and on. The color of the drink recommends The Green-eyed Monster, also spoken in the show, but as that is a reference from Othello it didn’t seem right.

In the end I kept returning to the Unparalleled Philistine, an insult from Sir to Cocky that Cocky misinterprets as a compliment, and a nice phrase of duality to match the ingredients of the drink.

Stir with lots of ice (needs a good dilution here) and strain into coupe.

Here is common gin (Cocky) mixed with a higher end herbal liqueur (Sir) with a few dashes of lactart (just gives a tartness to a drink — like citric acid from juice without the juice). A London Dry like Beefeater or Gordon’s would probably be more appropriate, but the G’vine here is a nod to the wine in the show (G’vine comes from grapes) and I felt played well with the Chartreuse. The lactart is actually a little bit of acid as a nod to the character of The Kid in the show, Sir’s apprentice and taunter of Cocky.

Cocky does a lot of guzzling in the show. This is definitely one for sipping. With all due respect.

The Roar of the Greasepaint – The Smell of the Crowd

My next production, which opens this weekend, is a bit of a labor of love a long time coming. I did this show 22 years ago and always wanted a chance to do it again. The problem is that no one ever does this show. That’s a shame, because there’s there some wonderful material here. Perfect? By no means, but neither is a good chunk of theater that is done constantly, and no others have the gorgeous songs “Who Can I Turn To?” and “Feeling Good” among others.

The story itself is allegory for the British class system, and this is one reason the show is avoided, certainly in the US. People think its politics are outdated. The ideas are absolutely simplified, but the story of Haves and Have-nots, where the ruling class defines rules in order to keep the lower classes in their place, is certainly one I feel is relevant to our current political climate in this country.

In the show, Sir is the Have playing against Cocky the Have-not on a life-size gameboard. The setting is not clearly defined (it’s a barren landscape in the script, and Leslie Bricusse once said the show was supposed to take place in the post-apocalyptic world everyone suspected was coming at the time the show was written in the 60’s). The songs are all fairly liftable, meaning that for the most part they aren’t woven seamlessly into the story as musicals now tend to do it (or try to) and the scenes seem like British music hall comedy routines. It’s a weird and lovely (and very darkly comic) show.

So how would you portray this on a poster? That was my challenge here. The original production simply had a silhouette of Cocky and Sir arguing over a bag. With all due respect to the original designer, I don’t feel this says much about what the audience has in store. The fact that ANTHONY NEWLEY and CYRIL RITCHARD appear over the title probably made the graphic not nearly as important.

For my production though, which I was directing and choreographing as well as performing in (not my original intention — I really wanted to do the show, and no director came forward to apply), I wanted a poster that showed the struggle, but also pulled in the “game” aspect. This was important since my setting was actually to be a toy shop in ruins and I felt there should be some toy aspect on the poster. In addition I wanted to show the struggle between the two characters and, if possible, convey a feeling of circa 1960, but in ruin.

The end result was this: 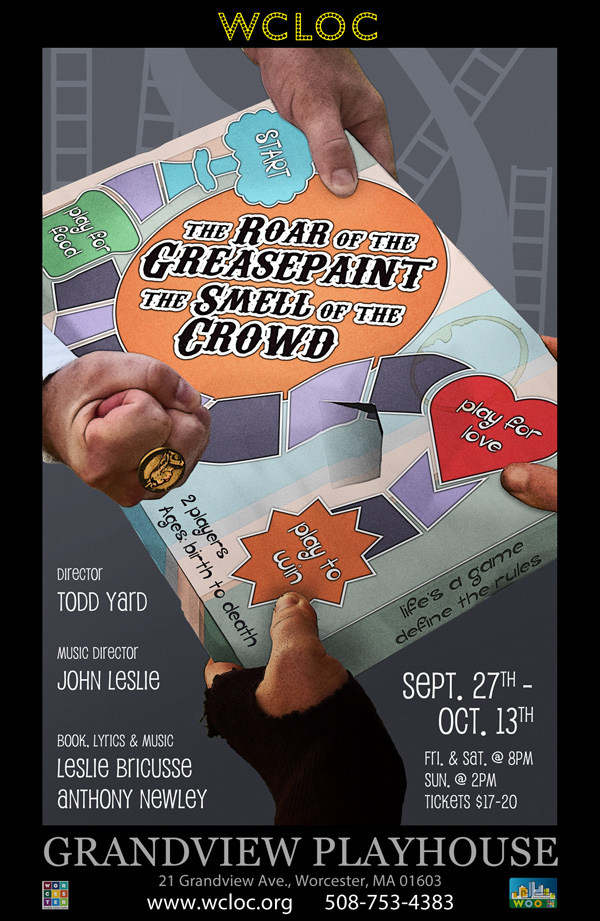 The photos are all of my hands, actually, and the gamebox is a Dora the Explorer Chutes and Ladders game that I then modified with the new artwork digitally. I tried to use colors that I saw on old games from the 60’s (Life, certainly) along with an appropriate font, and started the game on the box with a mushroom cloud. The taglines I felt added just enough insight into what goes on in the show (playing for bread or love, from birth to death), and the chutes and ladders in the background add some additional texture.

Probably one of my favorite touches, not apparent in this low-res version, is the ring on the finger made from a coin bearing the likeness of Queen Victoria. The raised edges on the ring have dried blood. Like I said, the show is darkly comic, and I felt the violence should be at least subtly represented on the poster.

That’s the poster, now how about a drink? As the cast is mostly underage kids, I wasn’t really inspired to create a whole suite of cocktails (I mean, there’s not going to be a cast party to try them out), but I had to do one, didn’t I? Coming next… 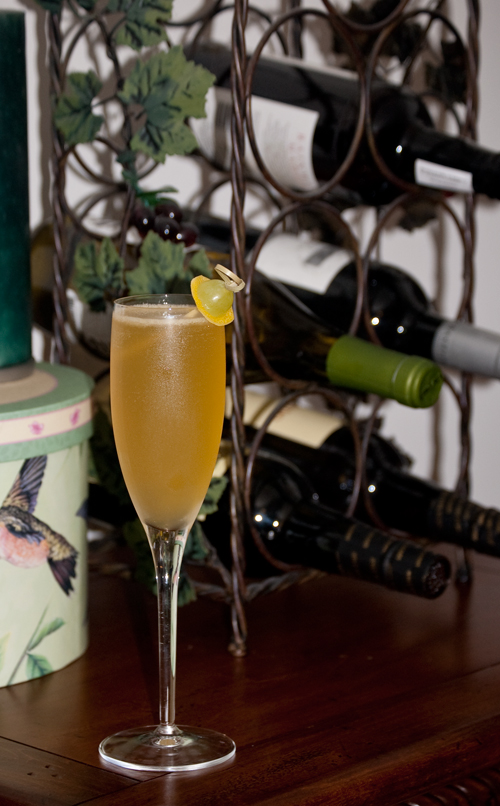 OK, I thought I was done with the Light in the Piazza cocktails, but then I saw a limoncello with the label Fabrizia on it. Fabrizio is the name of the young lover in the show, so I couldn’t pass it up. Thus:

Stir with ice and straing into a champagne flute.
Top with 3.0 oz. American sparkling wine.
Garnish with a half grape on a toothpick.

Once more, stuck to Italian mixers mostly. Basil, lemon, a nice tart sweetness. The Fernet cuts into that just enough. The sparkling wine is American for the character of Clara, but you can top with whatever you’d like, obviously.

The grape is the hat, if not so obviously. 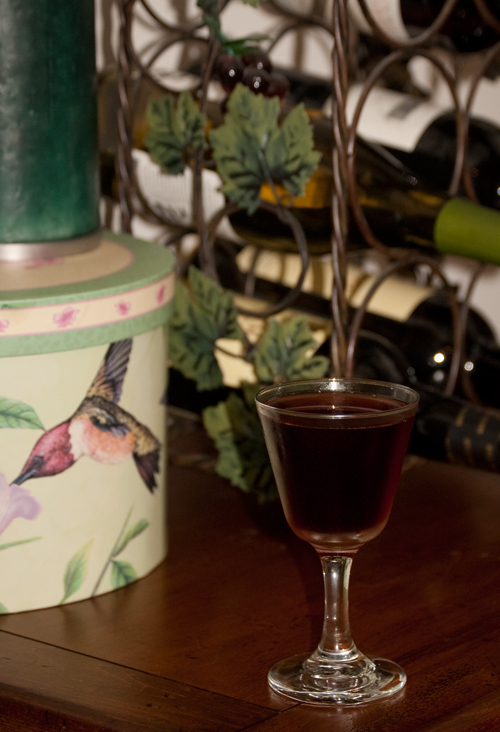 I had a request from a friend and cast member of the Light in the Piazza to create a drink specifically for him, with the only request being for it to be sweet. As this individual was playing Signor Naccarelli, I produced something I felt appropriate for such a gentleman.

Stir with ice and strain into a coupe.
Garnish with a pinch of salt.

For the most part I stuck with Italy, with the base being a rich Italian vermouth. To this I added Cognac (just over the border, right?), some Amaretto for more sweetness and nuttiness, and the Cynar for some needed bitterness. I love myself some saltiness with sweet, so the pinch of salt enhanced the final composition for me.

I don’t go for overly sweet drinks myself usually, but found this one offered a richness that still appealed to me. And I’d take this dessert any day over a bowl of ice cream. 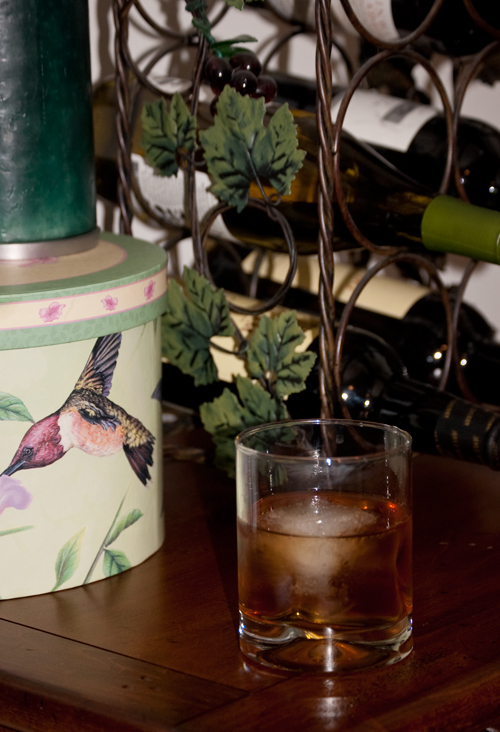 For the next Light in the Piazza cocktail, we now move from the Italian locales to Winston-Salem, North Carolina, “the land of corduroys,” according to Clara in the show.

Stir with ice and strain into old fashioned glass over ice.
Garnish with an orange peel.

Here I used unaged American whiskey, good ol’ moonshine, for the base. To that I added Cocci Americano as a nod to Italian setting of the show. This brightens the drink up a bit, which is needed after adding the rich Root liqueur, which is smoky and thick with spices like cinnamon and clove and allspice. The bitterness in the Cocci wasn’t enough, so I put in the Hiver Amer as well, which also has strong cinnamon notes. The Smoke Gets In Your Eyes contributes even more smoke, which I felt appropriate for such a cigarette center.

I suppose this should contain a Surgeon General’s warning as well. 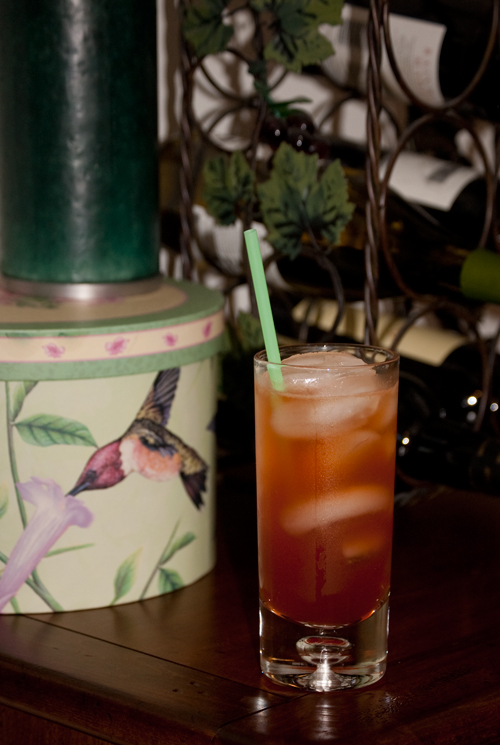 Getting back (finally!) to my Light in the Piazza cocktails, the next locale featured after Florence is Rome. I happened to have a huge bottle of Sambuca that I have barely touched (like many of my unused bottles, I purchased it for a recipe, but found I generally wasn’t a fan). So my mission here was to make a drink I liked with an ingredient I normally wouldn’t. Thus, the Roman Ruin.

Shake with ice and strain into ice-filled Collins glass.
Top with 2.0 oz. of club soda.

There are of course the traditional three coffee beans served in Sambuca, so as a nod to that I mixed the Sambuca with an espresso liqueur. Very sweet. The Italian Aperol helped to cut that a bit with bitter, and the lemon juice offered a much needed acidity and brightness. Such a strong drink, taste-wise, is not diluted much — and is actually helped quite a bit — by the club soda to top.

I still won’t be reaching for the Sambuca with any frequency, but when I do I think all roads will lead to this.