My production of Spamalot opens tonight, and so I present the last of the cocktail series with its creator, Mr. Eric Idle. 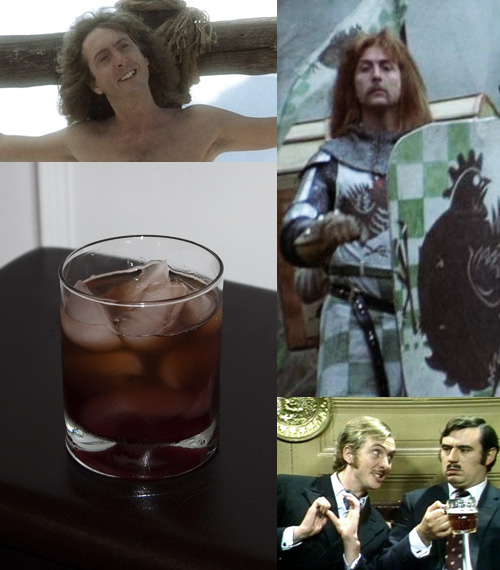 So Spamalot is not just Holy Grail on stage, but rather a good chunk of Holy Grail with bits and pieces of other Python bits from Flying Circus and the movies, as well as new material written by Mr. Idle and John Du Prez specifically for the show. It just seemed fitting to throw a little bit of everything into this drink. To that end:

Stir all but the ale with ice, then strain into old fashioned over ice. Top with the ale.

Of course I had to do something with Spam. I have infused whiskey with bacon, so doing the same with Spam didn’t seem like too much of a stretch. I sautéd some Spam and had it sit within a bottle of Jack Daniels overnight, then strained out the meat and fat. The Jack Daniels choice was merely because I had a bottle sitting around, I will admit, though it did pair nicely in the end. The result is just a faint flavoring that doesn’t overwhelm (I don’t think you would know if I put a shot in front of you).

After that, for an additional nod to Holy Grail, I grabbed some Benedictine for Brother Maynard (after toying with the thought of some pine-infused eau-de-vie for Roger the Shrubber or an egg for Sir Robin), which added some herbal sweetness. I didn’t want too much, because I also had some rich sweetness from the Cockburn’s port. This ingredient was chosen primarily for its name, as it was the best I could find for acknowledgment of Mr. Idle’s classic “wink wink nudge nudge” character (“Cockburns? I bet it does, I bet it does!”) — perhaps hitting the nail a little too hard on the head, but a double entendre was harder to come by in the liquor store than I expected.

At this point, I had a rather heavy drink, so the Cocchi Americano fortified wine helped to brighten it up a bit and add some bitterness. Yes, the ingredient is actually Italian, but the Americano tag was a tip of the hat to Mr. Idle’s American residency for the past 30 years.

As I was putting this together, I came across the official Monty Python Holy Grail Ale (tempered over burning witches). I just had to. Topping this concoction with the ale was a welcome touch, actually, upping the bitter and muting the sweetness and creating a nice balance.

Spamalot cocktail #5. Now we come to the king. 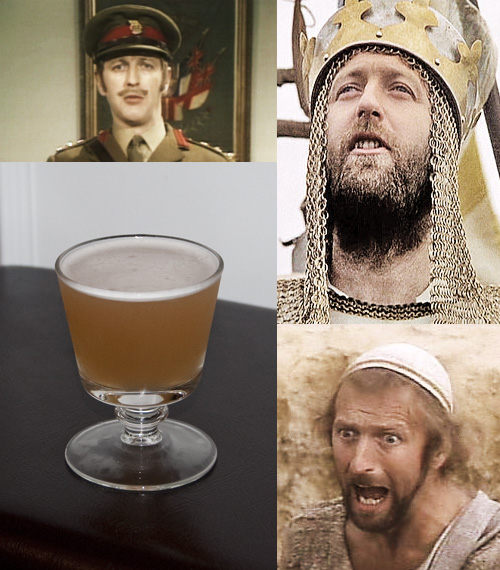 Shake with ice and strain into coupe. Dust with cinnamon.

Lots going on here, but I had a lot of ground to cover. Mr. Chapman, good for him, was a recovering alcoholic in the end, but during Holy Grail apparently was often plastered. In an interview I saw he mentioned that at his worst he was drinking four pints of gin a day. Holy… grail. There is something that is wrong about even creating a drink for him. Which is why I think he would approve.

So we start with some gin, Plymouth, which I think is decent and military. Under that is something a little fruity (I love the story that when a female fan was appalled to find out that one of the Pythons was gay — Mr. Chapman being one of the first celebrities to publicly come out — Eric Idle responded to them in a letter that the other Pythons had found out who it was and had taken the individual out and had him shot; at about the same time John Cleese had left the group and Mr. Idle always wondered whether the woman had assumed it to be true).

The ginger liqueur, of course, is for King Arthur in the Holy Grail and gives some more sweetness with the pineapple. The rum (went with Private Reserve here) is for Mr. Chapman’s Yellowbeard movie and adds a nice spiciness with the ginger. Byrrh, I’m almost ashamed to admit (almost) is a bad play on letters in order to get a representation of Life of Brian and the jokes about myrrh (“And thanks a lot for the gold and frankincense, er, but don’t worry too much about the myrrh next time.”). It adds some additional sweetness and bitter qualities, and I think brightens the drink up a bit. The Boker’s bitters are fully titled Dr. Adam Elmegirab’s Boker’s Bitters, and were included to tone down the sweetness slightly and for Mr. Chapman’s medical beginnings (he studied to be a doctor).

The cinnamon dust is for one of the funniest Chapman bits I saw, in which he appeared posthumously. When the Pythons appeared at a comedy festival in Aspen, they brought out an urn which apparently contained Mr. Chapman’s ashes. During the interview, Terry Gilliam accidentally kicked over the urn, at which point all the Pythons attempted to “recollect” them, one even with a dustbuster.

There you go. As easy as one, two, five.