Apple and Some Coffee 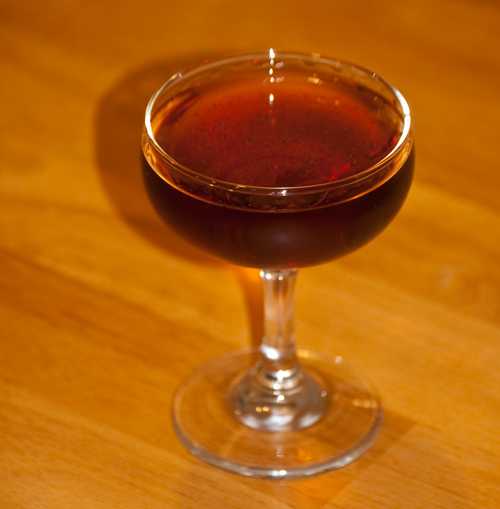 OK, even though Watermelon Pickles was the first Parade drink I conceptualized, I hadn’t really locked on a concept for the whole collection and so hadn’t proceeded with mixing anything up. Coming up with random drinks isn’t as fun for me as finding a theme that I can carry through. It was when I heard a line, spoken by Leo, that all he wanted for breakfast was “an apple and some coffee” that things came together. Apple and coffee I could work with. Now I had two drinks based on food spoken about in the show, and the theme was set.

Apple and Some Coffee

Stir with ice and strain into coupe.
Grate coffee bean as garnish.

I used Carriage House apple brandy here, but would be curious to try some applejack in its place to see how that changes things. The Kalhua obviously brings on the coffee taste — a little goes a long way here. I felt the Cocchi brightened up the result somewhat, which was feeling dark and heavy from the Kalhua, and added some bitterness as well. The coffee bitters provided some additional coffee flavor while countering the Kahlua’s sweetness. The final garnish of the bean is really for the nose more than anything else.