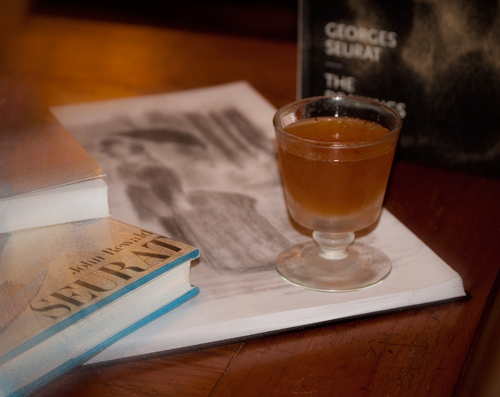 Before starting in on my next collection, I thought I would post an addition to my Sunday in the Park with George drinks. This in itself wasn’t inspired by the show, but rather was a drink that I was developing while in the show (well, not while on stage…). At one after-show gathering I made it for our music director, who had gifted me with a bottle of Ron Zacapa. I made him the drink and gave him the opportunity to name it. He immediately dubbed it “Lesson #8,” which is a song from the show where George begins by reading his great grandmother’s written grammar lessons from her lesson book before connecting the simple words to his own life.

Shake and strain into coupe. If desired, crack fresh pepper as garnish.

This one began with the vanilla, fig and black pepper syrup. I thought an aged rum would work nicely with it, and I think it does. The quinquina is a favorite ingredient of mine, giving a bright bitterness to a drink. The lime juice balances everything out with its acid, which is necessary here for me because of the sweetness present from both the syrup and the quinquina.

George would have liked to see people out drinking on Sunday.